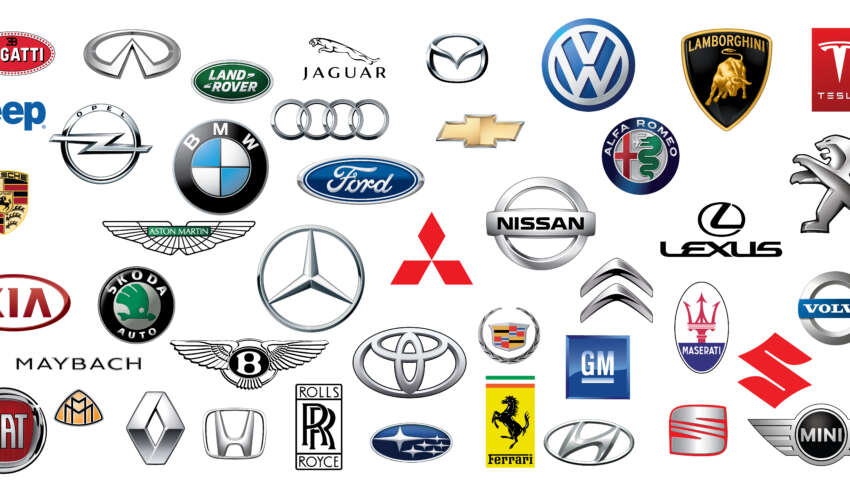 Car company logos often have a rich history behind them. Whether the logo is symbolic in nature or tells a story of family business and values, it’s always interesting to dive into brand origin stories. Sit back and let us take you through some of the most iconic car brands and the meanings behind their symbolic logos.

Instantly recognisable, the Toyota logo showcases three overlapping ovals. Two of the three ovals represent the customer and the manufacturer, forming a “T” for Toyota. This “T” symbolises the unification of customer and manufacturer, and a sharing of heart and values.

The outer oval, encircling the other two ovals, symbolises the global embrace of Toyota, with white space between signifying boundless opportunities to grow.

The Audi logo is known for its four interlocking rings, all in a neat and unified row. Let’s venture back to 1899, when car manufacturer August Horch founded his company, August Horch & Cie. Spending a decade making two- and four-cylinder cars, he eventually left the company after clashing with the board of directors.

So, he founded a new company and called it the Latin translation of his family name: Audi. Horch saw great success over the next few years, winning three consecutive titles at the Austrian Alpine Rally.

When global recession hit in 1929, demand for cars dropped significantly. Four of the most prominent car manufacturers at the time (Audi, Horch, DKW and Wanderer) began to struggle. As a result, the four brands formed the Auto Union. Each ring symbolises one of the four car manufacturers in the Auto Union and, whilst the emblem has seen some changes, the rings have always remained.

The Peugeot family selected their iconic lion logo as a bold and powerful statement. It has seen several variations over the years, but initially the lion’s teeth represented the sharpness and strength of the steel products the Peugeot brothers were producing.

As Peugeot progressed to automobiles and went through a number of innovative changes, the lion emblem also changed, and is symbolic of the majesty, strength, and courage of Peugeot as a brand. When the Peugeot lion began standing on two legs, the logo demonstrated Peugeot’s unbreakable brand and dominating influence in the automotive world.

BMW came to be when aircraft engine manufacturer Rapp Motorenwerke was renamed to Bayerische Motoren Werke. Initially, BMW had no need for a logo, however, when they entered the commercial space in 1917, it was quickly realised the brand needed a symbol that was all its own.

The four quadrants of blue and white have long been believed to represent plane propellers due to an advert from the 1920s that showed the BMW in the rotating propeller of the featured plane. Which makes sense, considering BMW started out manufacturing aircraft engines. However, this is actually a myth.

Really, the logo is simply a representation of the company’s origins – the white and blue is an homage to the State of Bavaria, Germany, where BMW originates.

Originally, the Cadillac emblem was a simple family crest for Antoine de la Mothe Cadillac. He declared his family lineage was linked to old French royalty, and used the crest as a result. But it’s suspected he embellished a little bit of his family history… or a lot.

Regardless, the crest stuck. Featuring a crown above the crest, merlettes (the “ducks”), and coloured stripes surrounded by a laurel, the emblem was a representation of pure nobility and aristocracy.

The current logo has a more modern, geometric look to it, but still maintains that same structure and colour scheme that emanates wisdom, prowess, boldness, and valour.

The Mercedes-Benz logo has seen several changes through its 120 year history, but the three pointed star has remained an icon for the brand. And what does it mean?

Simply that Mercedes-Benz dominates in land, air, and sea.

A true classic, the Porsche symbol has remained pretty much the same in its 60+ year history. While some argue the validity of the story, many believe the logo was drawn on a napkin by Ferdinand Porsche’s son Ferry during a meal. Others believe it was created by engineer Franz Xaver Reimpiess.

Regardless of true origin, the Porsche logo has become a true symbol of power and luxury in the world of automotives, featuring a crest and coat of arms that pays homage to Stuttgart, home of Porsche HQ. Featuring a horse for the Stuttgart city seal, and antlers and stripes for the Wurttemberg’s state seal, the Porsche logo truly highlights its origins and roots.

The horse theme continues with Ferrari’s “Prancing Horse” and dates back as far as 1692. A comparable design was found on the Royal Piedmont Regiment of the Duke Savoy’s regimental banner. As it goes, it was suggested to founder Enzo Ferrari that he paint the prancing horse on the side of his cars for luck, as this same horse was painted on their son Francesco Baracca’s plane during the war.

Despite Ferrari himself telling this origin story, others argue the horse was painted onto Baracca’s plane to symbolise a kill Baracca got during the war, in which he shot down a Stuttgart pilot. Remember Porsche’s logo, with the horse symbolising Stuttgart?

Regardless of true origins, the Ferrari logo has become a symbol of both fun and playfulness, as well as power and strength.

The Subaru logo features a cluster of silver stars against a blue background, and has become an easily recognisable symbol for the car brand. But did you know that subaru is actually the name of the Pleiades star cluster M45 in Taurus?

Hit by a car: the legal steps to take and how a personal injury lawyer can help

Being hit by a car can be an emotionally and physically traumatic event. It is important t…